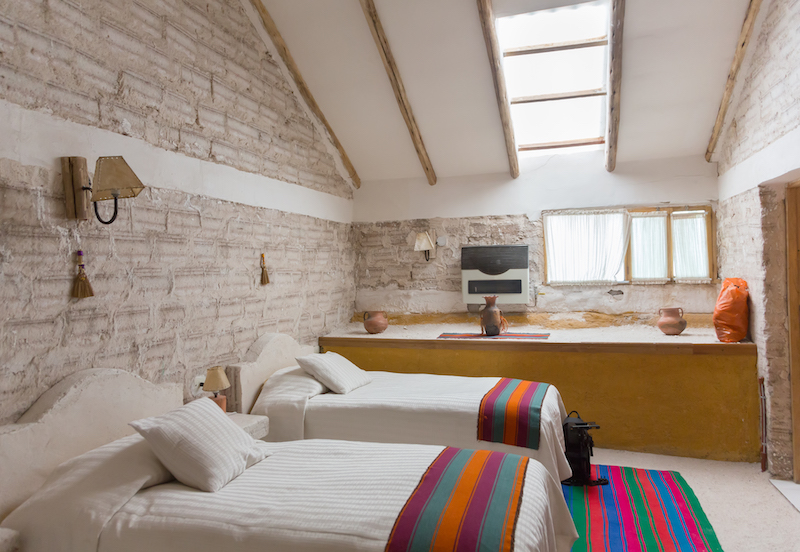 Typically, when you're on a multi-day Salar de Uyuni tour, the tour agency you go with already has chosen the accommodations for the tour. Often those accommodations can be rather remote and basic.

Despite the small size of the town of Uyuni, there is a reasonable amount and variety of accommodations available.

Unlike most of Bolivia, reservations are recommended if you'd like to stay at a nicer hotel or hostal in Uyuni. Unfortunately hotels tend to be rather small, hence the reason they can fill up quickly.

You won't have trouble finding a place to stay in Uyuni if you choose to go without a reservation--but you might be forced to stay somewhere without heating nor hot showers.

Luxury and High-End Hotels in Uyuni

If you really feel the need to splurge before or after your tour of the Salar, there may be no better place to do it than at the Hotel de Sal Luna Salada.

A unique property built right next to the Salt Flat itself, this hotel checks all of the boxes, and represents luxury not often seen in Bolivia.

Featuring walls built completely out of salt, beautifully decorated Andean-themed rooms and even a decadent Spa, this is our pick if money is not a factor for you.

Located in nearby Colchani, costs of getting into and out of Uyuni can be a downside, but for everything this hotel provides, it ends up being a pretty fair value.

Oh, and don't forget to consider a room with views of the Salar!

The Hotel Palacio de Sal, the original salt-built luxury hotel on the end of the salt flats, is a classic choice of many visiting Uyuni.

Also about 25km outside of the Uyuni in Colchani this hotel brings an undeniable style to the salt flats. Like its peers, it takes full advantage of the stunning scenery to provide a fantastic and ethereal experience for its guests.

Recently renovated, this hotel was a serious contender for our top spot, and gets fantastic reviews from its guests. However, it can sometimes be a bit more expensive than other hotels nearby, bumping it down to our second spot.

Another hotel built almost entirely out of salt, the Hotel de Sal Cristal Samaña is a respectable alternative to other hotels around Colchani.

Featuring everything you'd want in a luxury hotel, this hotel is one of the largest on the salt flats, and will typically have room even without much advanced planning.

Again, keep in mind it's a bit out of town, so you will have to plan your tour from Uyuni accordingly.

The Hotel de Sal Casa Andina is our top pick for luxury hotels in the town of Uyuni.

Though not as decadent as some of the hotels in Colchani, rooms here are seriously comfortable and guests consistently come away satisfied.

After a long three days out on the tours, the large rooms and hot warm showers at Casa Andina are always welcome.

This is also one of the few hotels in the town of Uyuni built with salt.

The other luxury option available in Uyuni, Hotel Jardines de Uyuni is stylish and bold, with lovely common spaces and comfortable rooms.

A great choice if you're looking for something comfortable that's not out in Colchani.

Mid-Range and Value Hotels in Uyuni

Las Tholas is a modern hotel in the town of Uyuni. Certainly not to be confused with any of the luxury choices above, nonetheless it's a hotel where you can expect to be comfortable and have nice clean rooms ready for you.

Las Tholas consistently gets good reviews from guests and is a great choice for guests who like to eliminate surprises and reserve a hotel where they can rest easy. That makes this hotel our favorite mid-range option in Uyuni.

However, unlike most hostals, it features spacious private rooms with large beds.

Almost a combination of hostal, b&b and hotel all in one--a solid mid-range option in Uyuni.

Tonito hotel is a Uyuni classic, filled with character and quirk. Featuring the classic Minuteman restaurant--where many tourists gather to collaborate and find other tourists to fill out a Salar tour--Tonito is a great base to stay the night before your tour.

Though not the flashiest hotel in Uyuni, these and other intangibles--like a fantastic breakfast--make Tonito a good choice for backpackers or other adventure travelers who really want to ensure a good night's sleep without missing out on the character of the town of Uyuni.

Budget Hotels and Hostels in Uyuni

Le Ciel d'Uyuni is a charming and inexpensive little hotel just 100m from the main square.

Clean rooms and comfy beds are one of their main draws, perfect if you don't need much more for your time in Uyuni or if you're only spending a few hours.

This hotel feels a lot more like typical Bolivian hotels you'll find in other cities--don't expect a real "American" breakfast and be prepared to bring your own toilet paper. But if you're used to that already, then this hotel is quite a nice value for Uyuni.

Another hotel that is undeniable Bolivian, Hostal Reyna del Salar has large rooms and affordable prices.

Hostal Oro Blanco is a standard Bolivian hotel located near the main plaza.

Rooms aren't huge, but they tend to be clean and reasonably comfortable. This hostal should be on your list if you're looking to save during your time in Uyuni.

Another standard Bolivian hotel in Uyuni, Hotel Julia offers affordable triple and quad rooms--a good option to look at if you're traveling with a family or with a few friends and need to keep costs down.

If you're only looking for a bed because of overnight logistics, Bunker Hostel might be the place for you.

Don't expect too much more than a bed and a private bath with water that may or may not be hot.

Bunker also features inexpensive mixed dorms if you really need to save on costs and want to stay somewhere reasonably clean and safe.

Residencial La Cabaña is one of Uyuni's most inexpensive places to stay--if you've been traveling very light and staying in shared dorms, here is a chance to graduate to an inexpensive private room with shared bath and get a night of sleep in before headed out to the Salt Flats.

The hotels that you stay in around the salt flats, and on your tour will roughly correlate with the level of tour that you purchase. Don't expect luxurious places to stay while you're actually out on your tour.

Many of the hotels on the first night of a 3D/2N trip will be made out of salt--not for its luxury, but rather because it's practical and cheap to gather from the salt flats. And by built with salt, we mean at least have salt blocks in the walls. The floors and other parts will probably not use salt.

These hotels will still be rather basic.

Don't expect hot water, nor heating from most of these hotels (though thick blankets will be in abundance).

Rest assured, however, you'll likely be exhausted and drift off to sleep quickly in any hotel.

The Tayka Chain of Hotels

One exception to the rule is the Tayka chain of hotels. The Tayka hotels were originally built and operated by Fremen Tours--though now are no longer apparently affiliated with the company.

Though still not comparable to the luxurious hotels around the salar closer to Uyuni, like Luna Salada, Palacio de Sal, Cristal Samana, and Casa Andina, the Tayka hotels are a considerable step up from the rest of the hotels on the common tour route.

You're much more likely to find rooms that may have things like heating and hot water--luxuries you can't guarantee you'll get on other tours.

It's definitely something to ask for before starting your tour if you value it that highly.

What to Ask For in a Hotel

If you're staying in Uyuni, and especially if you're reserving a place to stay the night of your stay, in-person, we'd recommend you'd ask the following before booking:

First, and most importantly, whether you can view the actual room you'll be staying in. Don't be ashamed! This is common practice in South America, and employees will show you the rooms.

Once you get a chance to see the room, you can check:

If you see something you don't like, ask about any other rooms on the property.

If you're booking a bit further in advance, you should also ask about:

Always ask for a receipt of what you have paid, and always have extras and other details put into writing whenever possible.

What to Ask About Tour Hotels

Though most tour providers will already have arrangements in place with their respective hotels and tend to not deviate from them--you should still ask about your potential hotel, and consider negotiating on some things.

Primarily, for hotels on the salt flat tours, it's worth asking and double checking about: